Aldebaran began publication in 1971 as an anthology of prose, poetry and art from students and faculty members of Roger Williams University (previously known as Roger Williams College) in Bristol, RI. Submissions from outside contributors were also included. Each volume was edited by various editors chosen by the board of the journal. More than 30 volumes of Aldebaran were published over the next two decades. Aldebaran ceased publication in 1994. 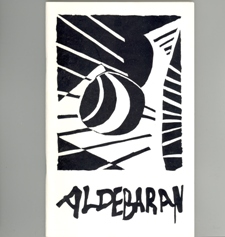